It’s no longer news that there has been a significant increase in the number of eSports viewers. In 2019, there were about 245 million casual viewers and 198 million enthusiasts – an audience total of 443 million. Newzoo forecasts that by 2023 the annual growth rates of viewers will be approximately 10.4%. Newzoo also released a new highlight on European eSports audiences growth — for both enthusiasts and occasional viewers: 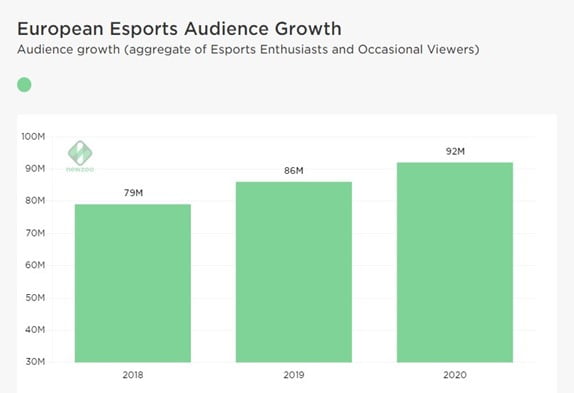 These whopping numbers are for eSports viewers alone; you can imagine the volume of viewers for other content  — news articles, videos, etc. Considering the fact that we are in the social age of the internet, there’s never been more content available and produced. Whether it’s news updates or video, content is increasing exponentially every day globally.

But what many people haven’t realised is that they’re presented with search results that are manipulated behind the scenes. Companies and people manipulate the system just to drive their own agenda: to make money or boost their visibility with fake views. Consequently, the combination of fake views on advertising-funded content is causing the true value of content to be misrepresented and the value lowered which is bad news for the content creators, advertisers and ultimately the viewers.

The biggest problem for advertisers and brands are fake views. Over 50% of the spend on online advertising is for views that are not seen by people. As you can imagine this is very expensive in a $250B industry where half the spend is fake. Companies have been trying to fight this for years with little success. Verasity developed Proof of View over the last 3 years and was granted a US patent. What this means is that all views will be available for advertisers and brands to see on the blockchain and will be able to differentiate between real views and fake views. For real views, advertisers pay as much as 10x versus for views where they buy them via a programmatic engine and have no idea their value.

Thanks to Verasity’s Proof-of-View innovation, a proprietary blockchain technology, ensures that video (content and ads) viewed on the platform are real bonafide views verified and recorded as an immutable public record. Proof-of-View( PoV) unlocks the ability to gain the true value of content by stopping fake views.

How Verasity’s PoV is preserving the Ecosystem of Viewers, Creators, Brands and Advertisers

Normally, a great piece of content would be shared organically and still grow as more people enjoy it. But that isn’t the case anymore.  Due to the increasing amount of content released every day, it’s harder for great content to get noticed. This has led people to game the system — by faking social proofs and companies — by buying ad bots that facilitate fake video views to monetize fake engagement.

Unfortunately, the viewers are on the receiving end. Videos inflated with fake views are often disappointing and of poor quality.  Many advertisers are still paying to run their ads on these “popular” videos — not knowing their ads are only being viewed by bots. Even creators who purchase fake views get stuck in a cycle — paying to maintain their ad revenue while living in fear of losing their channels. Moreover, the legitimate ones who don’t buy views are also at a disadvantage as their videos don’t get high enough engagement stats to attract sufficient ad-paying opportunities.

Verasity’s Proof Of View is a game-changer. Verasity’s video-sharing technology removes the influence that fake views have on how content is ranked or surfaced or valued.  PoV is designed to ensure that all video views are real and watched by real people giving real value back to good content.

By the process of eliminating fake views, the Verasity ecosystem is able to create a more fair and valuable platform for viewers, creators, advertisers and brands.

For Advertisers and Brands:

Proof of View (PoV) improves the whole video ecosystem by removing the influence of fake views — promoting transparency and trust. As a result the CPMs that advertisers are willing to pay increases significantly – as much as 10 times to prove that brands are getting real viewers watching real views!

Verasity is now granted a US patent.

Recently, Verasity officially received the Notice of Allowance for US Patent No 16/023,354 for System and Method of Proof of View via Blockchain. This means that Verasity’s  Proof-of-View (PoV) is protected as unique technology and can’t be copied by others for 17 years. This makes the technology much more valuable for Verasity and ensures that only Verasity will be providing it to ad networks and brands and can reap the very significant monetary benefits.

Verasity is leading the pack in providing proprietary technology to uniquely reward gamers, viewers, and publishers and to protect advertisers and brands from fake views.