In recent times, those in the DeFi and metaverse space have encountered yet another way in which ordinary people can earn considerable amounts of money on the blockchain. Coming in the form of play-to-earn communities, platforms such as Yield Guild Games (YGG) and UniX are early adopters of ecosystems that provide gamers in developing countries with these financial opportunities. Such business models, in theory, could utilize leisure as a way to help reduce unemployment around the world.

Although the idea of the play-to-earn model is still in its infancy, it is an idea that is turning heads. “PLAY-TO-EARN | NFT Gaming In The Philippines” is the title of an 18-minute documentary funded by YGG and created by Emfarsis Consulting about a group of people in the Philippines, a country that suffered unemployment as high as 40% during the pandemic. People in the Philippines had been playing Axie Infinity (a blockchain-based game that rewards its players) during the pandemic, discovering that they could earn two or three times the minimum wage by playing.

It is apparent that this new “Leisure Economy” could be the dawn of something huge. However, if you are considering joining a play-to-earn gaming guild, don’t let FOMO lead you down the path of making a decision too quickly. New investors in crypto, for instance, have a tendency to jump on the bandwagon of whatever is trending, without doing their own research. Let’s not forget the number of disappointed DOGE holders who filled their pockets with the popular token prior to Elon Musk’s SNL appearance, anticipating a surge in price, only for Musk’s remarks to send the value of the cryptocurrency down rather than up.

Evidently, when investing time or money in anything, it’s better to weigh up your options beforehand.

So what exactly are YGG and UniX offering players, and how do they differ? 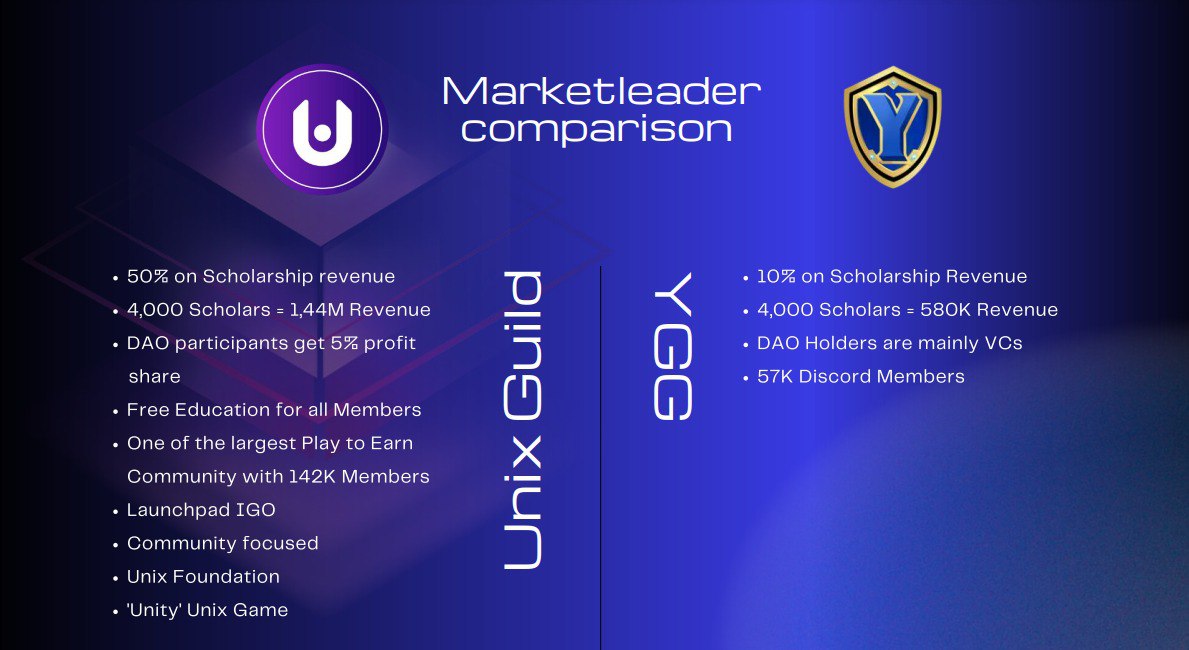 As the price of the NFT pets known as Axies needed to play the game has significantly increased, a profit-sharing model known as scholarships are issued to bring willing new players on board without them having to pay large amounts. UniX and YGG sell or lease their Axies to these new players, known as scholars, providing them with recruitment, coaching and management, in exchange for a percentage of the revenue they earn in the game. Yield Guild Games currently splits the revenue of its scholars in the following breakdown – 70% to the scholar, 10% to YGG, and 20% to a Community Manager. UniX, on the other hand, takes 50% – but don’t let that fool you. Comparing 8,000 scholars from both guilds, 4,000 from YGG produced 580K revenue, whereas 4,000 UNIX scholars would make 1.44 million.

Decentralised Autonomous Organisations (DAO) like UniX and YGG issue governance tokens in order to establish levels of voting power among holders. Holders of these tokens will determine how the platform develops. Therefore, community-conscious players may want to consider who exactly the individuals are that have the highest investment in the platform. Although Yield Guild Games ensure that each investor of their Seed and Series A rounds are carefully selected for their depth of understanding of the play-to-earn model’s potential, they are largely composed of venture capitalist firms. Also, in terms of community size, while YGG’s Discord is approaching 60,000, UniX recently surpassed 130K.

UniX’s Scholar and Education programme has currently onboarded 1,000 people, giving them access to some of the best teachers from their native country. These teachers don’t only work with UniX Scholars, but also with their 100,000+ community. This free education programme intends to identify and place talented individuals in jobs in blockchain and companies that UniX already has partnerships with. Regular creative and research competitions are run throughout the community in order to scout talent while rewarding members with tokens and points that will later equate to either a scholarship or employment. Furthermore, through the UniX Foundation Fund, access to the education programme will be available to everyone and not just scholarship holders.

As the originator of the concept of playing to earn in developing countries, Yield Guild Games is a tempting prospect for newcomers to the metaverse’s leisure economy. However, with UniX’s own native play-to-earn game, Unity, currently, in the works, it will be interesting to see how much more the NFT and the play-to-earn market will shift in their favour going forward. However, one thing we do know is that it is good to shop around.

Ethereum Regains Strength, Why $3,200 Is The Key For More Upsides